In some presentations, I assert that top-down data modeling should result in not only a business-consistent model but also a pretty well normalized model.

If functional dependency “just makes sense”, then the steps to go from an unnormalized list of fields to a normalized relational database, as described here, should also make sense from a business perspective. 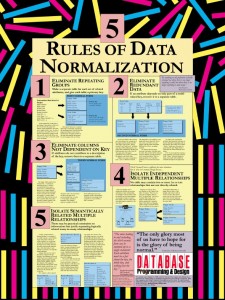 : published by the now bygone magazine Database Programming and Design, it was ubiquitous on 1990s IT cubicle walls. It presented each normalization step using business examples from dog breeding. (Some reading today might associate this with less savory aspects of pet breeding and sale. I share the opinion that the poster lacked sensitivity to this question).

Following the steps on the poster, you can see that they do make sense from a business perspective:

Of course the puppy poster isn’t an exhaustive treatment of normalization; a data model based on business analysis may not always reach fifth normal form. It will however be a “pretty good” normalization, a solid requirements guide, and help avoid green orders in the database design.

3 thoughts on “Lessons from the puppy poster”