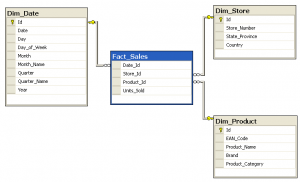 So these are the notes I prepared for the conversation. They helped us all get on the same page, hopefully they will be useful to others:

A reporting database should meet these non-functional requirements:

Here’s a brief description of dimensional database design followed by an explanation of how it delivers on the non-functionals above:

Generally, the pattern of a dimensional model is a “fact” table surrounded by several “dimension” tables.

A fact table may describe an event or transaction, like a store purchase, or it may represent the current status of a business element that can be described across many dimensions. For example, a patient in a hospital at a given time with a medical condition who is attended by a medical professional.

The fact table consists of

Each row of a dimension table represents the lowest relevant level of detail for a given business concern. A location dimension table might include one row for each section of a store at a given address, in a city, in a state, in a region, in a country.

While fact tables tend to have as few alphanumeric columns as possible due to their many rows, dimension tables can often be rich in descriptive information having relatively few rows.

How does the Dimensional Model support the non-functional requirements?

Below are a few other sources that may be useful in learning and applying dimensional modeling. Please feel free to add further resources in the comments section below.